This is my independent write-up of a vulnerability reported to SatoshiLabs by an anonymous researcher.

On August 16, I noticed two interesting commits in the TREZOR firmware and a new release called v1.5.2. I was informed that an issue had been reported via SatoshiLabs’s Responsible Disclosure Bounty Program.

I was told that there would be a detailed report in the next few days, but I’m really impatient and I enjoy a challenge!

Before I explain the exploit, I would also like to establish a few things.

Even before this exploit was discovered, the following security procedures were already in place:

Now that the exploit has been discovered, what you need to know is:

The first change I noticed was that, when booting the firmware, the SRAM is now wiped:

My initial thoughts were that custom firmware could access the storage backup made by the bootloader. However, I quickly ruled this out:

This file overrides the entry point of the bootloader and firmware.

The old entry point looked like this (relevant parts shown):

This initializes the .data and the .bss sections for static data before calling the firmware entry point.

However, the new entry point looks something like this (rewritten in C for clarity):

While the first version initializes about 32 KiB of the SRAM, the new entry point zeroes out the whole SRAM (which also initializes the .bss section).

When the STM32F205RE is powered on, the RAM is initially filled with random data. So I knew that the exploit would require starting the bootloader without power cycling the device.

To my knowledge, there are two methods to start the bootloader without power cycling: a software reset and a hardware reset.

A quick grep of the TREZOR firmware revealed that software resets are not used at all which meant I would have to resort to hardware resets.

The issue was that the hardware reset on many chips is a simple power cycle. However, as I looked at the features listed on ST’s website, I was in luck:

To access the hardware reset, I would have to break open the TREZOR case. Fortunately, I had a few uncased TREZORs to hand! After utter despair at my lack of hardware knowledge, I finally found the RST pin. Even better, the pin below was GND, so I just had to use a pair of tweezers to short the pins. 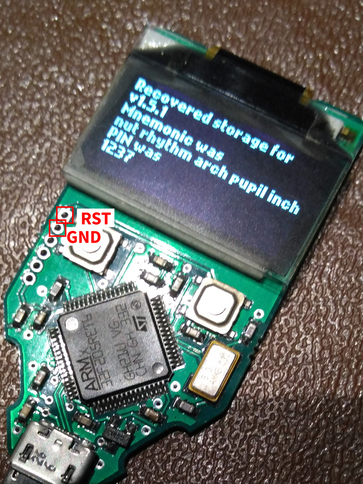 Since meta_backup lives in the .bss section, it would be zeroed by the reset_handler so it cannot be the attack vector.

However, the storage is also read into SRAM by the firmware. But, in order to write an exploit, I would have to find out the address of storage in RAM.

Unfortunately, SatoshiLabs only distribute the binary firmware, not the ELF files. Fortunately, the firmware can be built deterministically and soon enough, I had the address:

Then I was greeted with a beautiful sight. 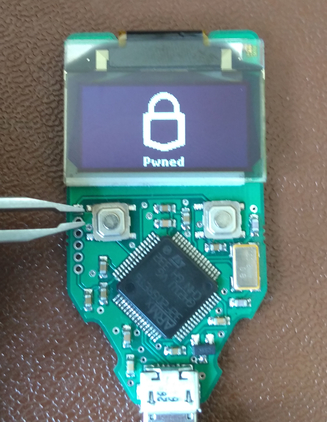 But the bootloader is non-upgradeable so people would have to replace their TREZOR to take advantage of this fix. However, the firmware is upgradeable.

How does a firmware upgrade solve the issue, then?

As I explained earlier, the bootloader initializes approximately 32 KiB of the SRAM. If the secret data was in that 32 KiB, it would prevent this exploit.

And this is the final of the three changes in that commit. All the secret data was marked as static CONFIDENTIAL. CONFIDENTIAL is a macro that places the symbol in a new section, called .confidential, which is placed at the start of SRAM and is less than 32 KiB.

Now, even when an old version of the bootloader starts it will overwrite .confidential from the firmware, preventing this exploit.